During the period 2019–2020, the following five main intervention areas are envisaged in the Action Plan for the organization of the International Year and relevant initiatives will be launched. A list of initiatives is available below:

Increased understanding, reconciliation and international cooperation among different stakeholders through coordinated advocacy and awareness-raising programmes focused on upholding and reinforcing the human rights of indigenous language speakers, deploying necessary resources and robust data through national statistics institutions, in accordance with the United Nations Declaration on the Rights of Indigenous Peoples, the 2030 Agenda for Sustainable Development and other international and national laws related to indigenous peoples and multilingualism, and other relevant normative instruments and strategies.

On Tuesday, 17 December 2019, the President of the UN General Assembly convened a High-Level Event to close the 2019 International Year of Indigenous Languages in New York, in line with General Assembly resolution 73/156. The event was organized in collaboration with UNESCO and UNDESA.

Within the framework of the 2019 International Year of Indigenous Languages, a three-days (4-6 December 2019) International Conference was organized in UNESCO Headquarters, Paris, France. The event contributed towards the promotion of human rights and fundamental freedoms of all language users to access information and knowledge in languages that are best understood. It also aimed to encourage all relevant stakeholders to take concrete measures for the promotion of linguistic diversity, truly multilingual internet and language technologies, with special focus on indigenous languages.

Within the framework of the International Year, the Communication and Information Sector of UNESCO and the Permanent Delegation of Canada to UNESCO hold a special event in the UNESCO Library (UNESCO Headquarters, Paris, France) on Monday 18 November 2019 at 14.30 p.m.

The IYIL2019 aimed to draw attention to the critical loss of indigenous languages and the urgent need to preserve, revitalize and promote them, and to take further urgent steps at the national and international levels.

Delegates were invited to attend the donation ceremony, by which the Permanent Delegation of Canada to UNESCO provided a copy of the Indigenous Peoples Atlas of Canada, that was available for public consultation and use in the UNESCO Library. 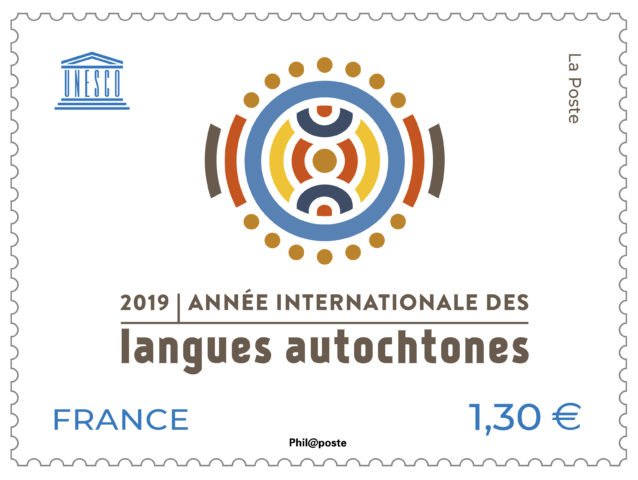 Launch of the IYIL2019/UNESCO Stamp

In September 2019, UNESCO, in cooperation with La Poste (France), has launched the official stamp dedicated to the 2019 International Year of Indigenous Languages. The IYIL2019 stamp features the stand-alone logo of the International Year and aims to contribute to its promotion. It can be purchased in all post offices in France as well as online.

On this special day dedicated to indigenous peoples, their human rights, languages, ancient histories, and rich cultures, several activities are taking place worldwide. UNESCO, as lead agency for the implementation of the international year, is launching a global social media campaign for the promotion of the day, including circulation of the Director General’s Message and launch of a dedicated video. Several Field Offices have organized relevant initiatives for the promotion, revitalization and support of indigenous languages, including Bangkok, Brasilia, Mexico City, Quito. A special commemorative event will take place at the United Nations HQ. Discover the global calendar of events on the International Day of the World’s Indigenous Peoples through the interactive map. 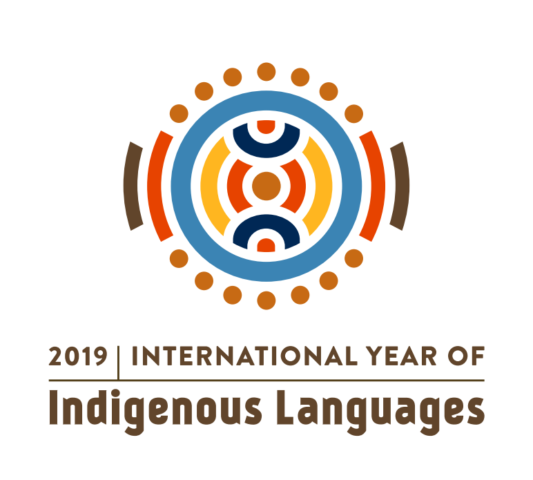 
The High Level Dialogue provided space for open consultations and encourage discourse on a shift of paradigm on the important role that indigenous languages could play towards sustainable development if ICTs are made accessible, inclusive and affordable for all, including indigenous language users. Indigenous languages are imbued with invaluable potential and universal knowledge that can be unlocked in order to contribute to development and innovation in domains such as education, science and research, culture, policy, industry and environment. 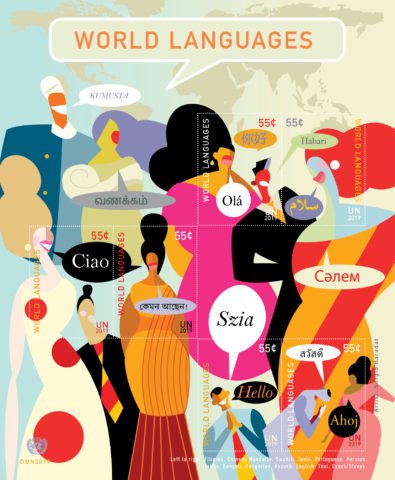 In observance of the International Mother Language Day, the United Nations Postal Administration, (UNPA) issued three mini-sheets of six stamps to honour the world’s languages. The stamps sheets feature greetings in 41 languages; they were designed by Sergio Baradat (United Nations). 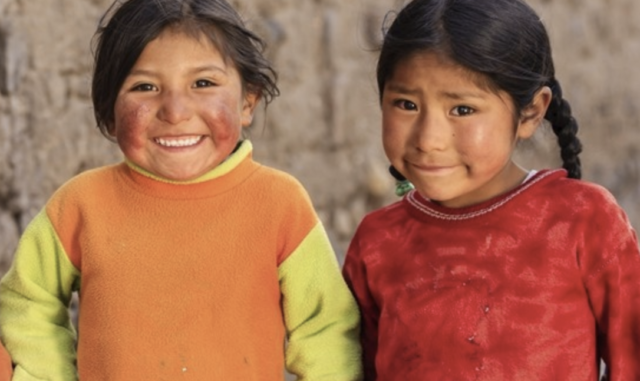 
The idea to celebrate International Mother Language Day was the initiative of Bangladesh. It was approved at the 1999 UNESCO General Conference and has been observed throughout the world since 2000. UNESCO believes in the importance of cultural and linguistic diversity for sustainable societies. 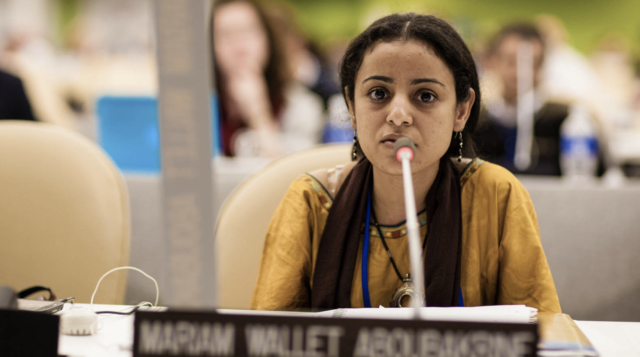 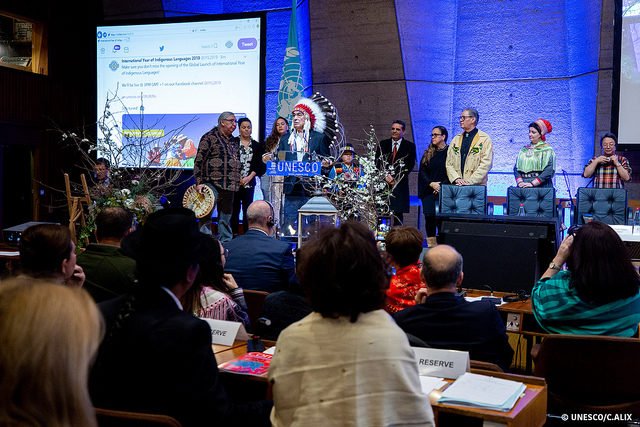 This official launch event is co-organized by UNESCO, UNDESA, and the members of Steering Committee for the organization of the International Year, as well as with the participation of other relevant stakeholders. Under the theme “Indigenous languages matter for sustainable development, peace building and reconciliation”, the event gathered high-level governmental officials, indigenous peoples, civil society, academia, media, information and memory organizations, United Nations agencies, public language harmonization and documentation institutions and private sector bodies.

2. Creation of favourable conditions for knowledge-sharing and dissemination of good practices

Delivered support, through the development of improved tools, contents and services, towards the sharing and enhancement of information, research and understanding about indigenous languages, conditional upon the involvement and active participation of the holders of such languages and knowledge, and additionally stimulated collaboration between relevant stakeholders in monitoring progress across all relevant fields, facilitated through improved data collection and evaluation. 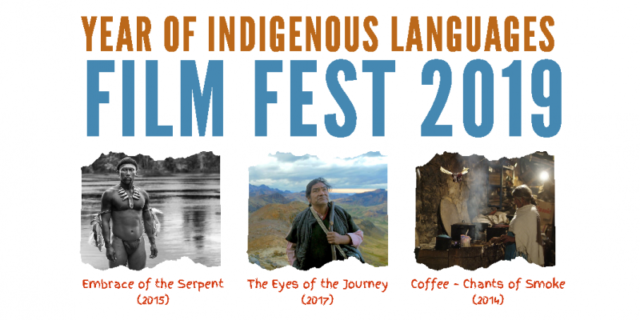 An Amazonian shaman searches for a sacred plant with two scientists; a spiritual master who converses with nature appears and reappears like a ghost in different regions of the Cordilleras Mountains; and a Nahuatl family struggles as they prepare to honour the death of a family member. These are just some of the main premises of several films that were shown at the International Year of Indigenous Languages Film Fest 2019, which was held at the Cinema Oasis movie theatre in Bangkok, Thailand on 27 September 2019.

Online Indigenous Film Festival of Latin America and the Caribbean

The countries from Latin America and the Caribbean together with UNESCO are launching an Online Indigenous Film Festival (OIFF) within the context of the International Year of Indigenous Languages 2019 (IYIL2019) and of the upcoming Latin American and the Caribbean Week, that will take place on 3 – 7 June 2019 at UNESCO Headquarters (Paris, France).  “68 Voices”, a creative animated indigenous stories, will be released on the dedicated website of IYIL2019 from 3 June to 14 June 2019.

Community media provide a platform for discussion and can give a voice to marginalized populations, including many indigenous groups. They focus on local issues and their programming addresses the topics most relevant to their listeners, which is usually broadcast in traditional dialects to ensure that facts are effectively passed on and the audience can actively participate. As such, this type of media is well-suited to the transfer of cultural knowledge and giving communities the ability to exchange information in their own language. 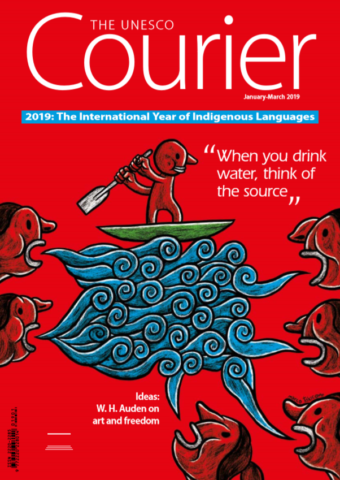 The UNESCO Courier on Indigenous Languages and Knowledge (IYIL 2019)

Most indigenous languages are in danger, even though they are the main conveyors of knowledge that provide original solutions to contemporary challenges. “The major influence on the sorry state of their languages is the fact that indigenous peoples are threatened themselves,” says Minnie Degawan (Igorot, Philippines) in her introductory article. “In the Philippines, the government has launched the use of mother tongues in schools, but no resources are available in terms of teachers and learning materials to allow for indigenous children to be taught in their mother tongues,” she explains.

The designation of 2019 as the International Year of Indigenous Languages (IY2019 (link is external)) gives us the opportunity to review issues related to indigenous languages and knowledge in other latitudes as well: among Fijians in the Pacific, the Dong in China, the Sámi in Swedish Lapland, the Bahima in Uganda, the Maori in New Zealand and the Mixtec in Mexico.

3. Integration of indigenous languages into standard-setting

Strengthened national and regional capacities to assess and mainstream indigenous languages and, as far as possible, to integrate them into national policies, strategic plans and regulatory frameworks. 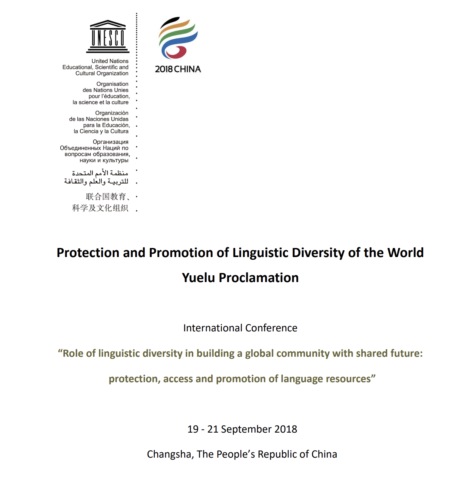 
The purpose of the international conference wass to review the status and situation of language diversity in the Asia-Pacific and other regions, as well as to explore new avenues for language resource protection, support and promotion worldwide. Undeniably, languages are a core component of human rights, and preventing their endangerment contributes to safeguarding people’s right to education, their capacity to access information and knowledge, and to participate to society. This conference aimed at contributing to the long-term objective of building a global community with shared future, and of developing pluralistic, equitable, open and inclusive societies. An outcome summary document was elaborated to explain the key issues that were identified during the conference, and to provide policy recommendations in the Asia-Pacific region. 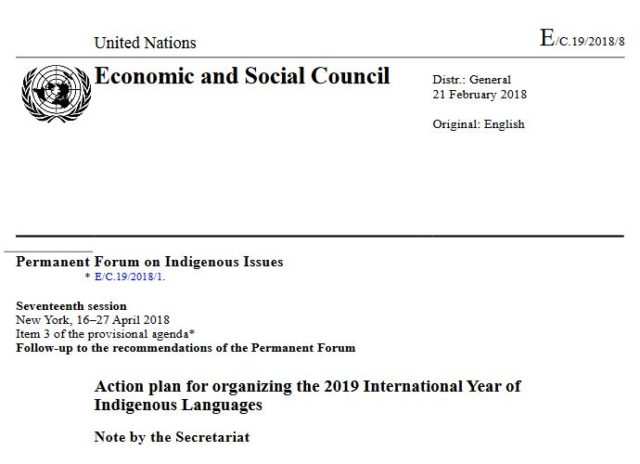 Action plan for organizing the 2019 International Year of Indigenous Languages


UNESCO worked with governments, indigenous peoples’ organizations, researchers and other stakeholders to elaborate an action plan which sets out the path to achieving the objectives of the International Year. This multi-stakeholder partnership is made up of a Steering Committee to oversee implementation, ad hoc groups to provide relevant advice, and contributing partners. The action plan lays out the key measurable objectives, principles and actions to be taken during the year and afterwards.

Delivered expanded educational capacity to provide more equitable and inclusive access to education in areas where indigenous languages and traditional knowledge feature prominently, the improvements being derived from new and open educational resources associated with relevant learning strategies, progressive teaching methods and teacher education, and a wide of language tools and materials, from traditional methods to cutting-edge information and communications technology solutions. 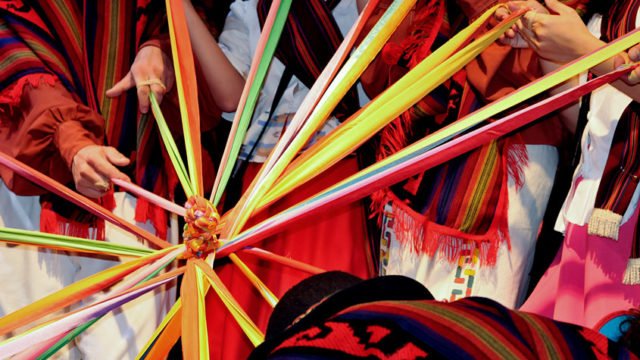 WIPO is launching a new training and mentoring program aimed at strengthening the capacity of women entrepreneurs from indigenous peoples and local communities to make strategic and effective use of intellectual property (IP) rights, in support of projects based on traditional knowledge (TK) and traditional cultural expressions (TCEs). 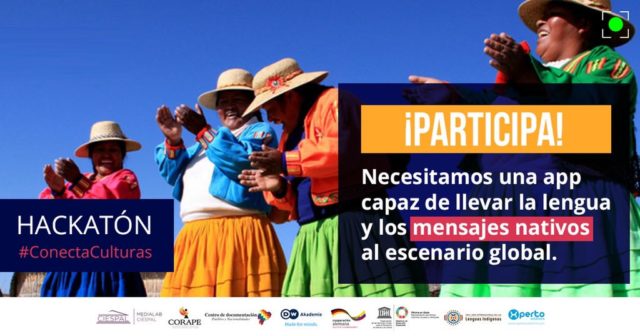 The Virtual Documentation Centre of the Peoples and Nationalities of Ecuador, which serves as a meeting point for existing research material from various sources and institutions, as a link to virtual libraries on related subjects and to publish research that has not been digitized and new productions narrated from the voices of the representatives of indigenous cultures themselves. 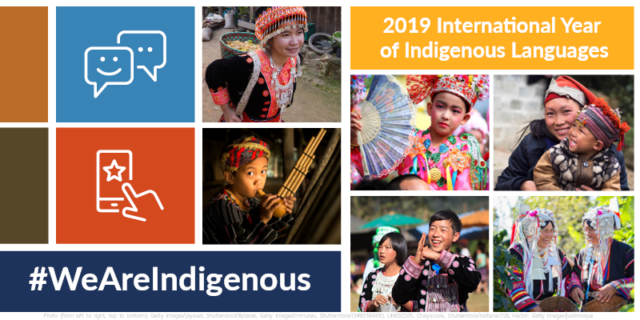 Dawn Bouttasing grew up in Phonsavanh, Laos, with a family that at home mainly spoke Khmu, one of the many indigenous languages of Laos. Her father set a rule that she and her siblings had to always speak Khmu with their parents, no matter where they were, and Dawn was taught to be proud of her Khmu heritage and traditions.

5. Growth and development through elaboration of new knowledge

Engaged and encouraged the global academic and scientific community to leverage the value residing in the intellectual assets in cultural and linguistic heritage of indigenous peoples both for their own benefit and for wider society on a national, regional and global scale. 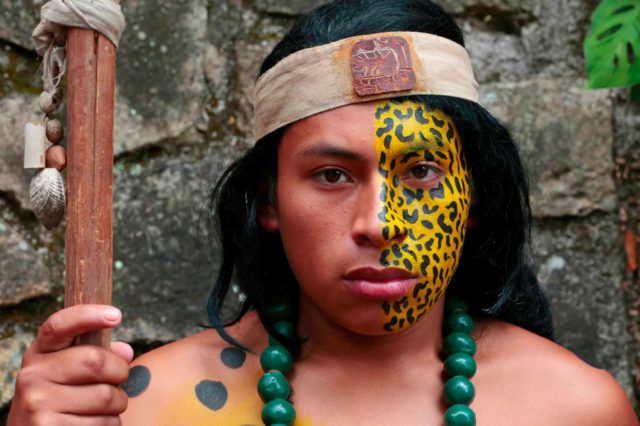 UNESCO has launched a Global Call for Research Papers within the context of the 2019 International Year of Indigenous Languages. As the deadline for submissions has been extended to 15 March 2019, researchers and practitioners from all over the world specializing in different fields and subject areas are strongly encouraged to submit in order to contribute to the preservation, revitalization and promotion of indigenous languages at the national, regional and international level.