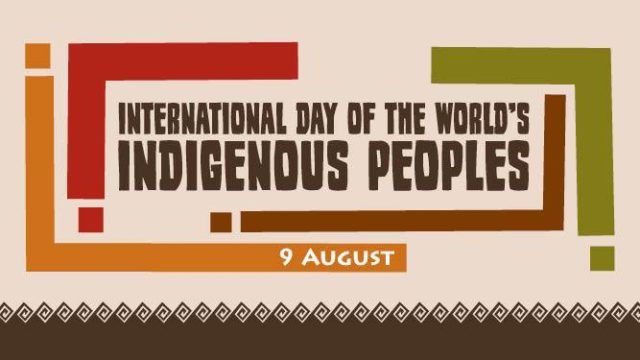 The date marks the day of the first meeting, in 1982, of the UN Working Group on Indigenous Populations of the Sub-Commission on the Promotion and Protection of Human Rights.

This year, the celebration of the international day will be dedicated to the International Year of Indigenous Languages 2019.

Indigenous languages are a significant factor in a wide range of indigenous issues, notably education, scientific and technological development, biosphere and the environment, freedom of expression, employment and social inclusion. However, many indigenous peoples continue to be confronted with marginalization, extreme poverty and other human rights violations. The linguistic rights of indigenous peoples must be an integral part of the human rights agenda.

UNESCO, as lead agency for the implementation of the international year, is launching a global social media campaign for the promotion of the day, including circulation of the Director General’s Message and launch of a dedicated video. Several Field Offices have organized relevant initiatives for the promotion, revitalization and support of indigenous languages, including Bangkok, Brasilia, Mexico City, Quito. A special commemorative event will take place at the United Nations HQ.

Discover the global calendar of events on the International Day of the World’s Indigenous Peoples through the interactive map.

The designations employed and the presentation of material on this map do not imply the expression of any opinion whatsoever on the part of the Secretariat of the United Nations concerning the legal status of any country, territory, city or area or of its authorities, or concerning the delimitation of its frontiers or boundaries.

Final status of Abyei area is not yet determined.

• Release of a new video for the promotion of IYIL2019 through UNESCO, UN and other information channels;

• The Director-General’s message prepared by all sectors.

UNESCO has broad mandates in the fields of education, natural sciences, social and human sciences, culture, and communication and information. Its policies, programmes and projects provide opportunities and have significant impacts for indigenous peoples worldwide. The 2030 Agenda commitment to ‘Leave no one behind’ brings new impetus to ensure that indigenous peoples’ priorities are heard. Following the adoption of the UN Declaration on the Rights of Indigenous Peoples by the UN General Assembly in September 2007, and the UN Development Group (UNDG) Guidelines on Indigenous Peoples’ Issues issued in 2008, it is increasingly important that UN agencies, including UNESCO, consider how to provide guidance on engaging with indigenous peoples. In this light, the UNESCO policy on Engaging with Indigenous Peoples seeks to outline a house-wide approach that will guide all of UNESCO’s programme sectors in their interactions with indigenous peoples and their organizations.

Each year, UNESCO marks the celebration of the Day by sharing information on projects and activities that are relevant to the annual theme.