“If I want to explain Remix, I would say it’s like Yam. Yam is a food we have had a long time. But if we take yam to explain Remix, it is like I pull a yam, but instead of making laplap
Vanuatu’s national dish), I use it for another kind of new cooking. To give others the idea that with yam you don’t just have to make laplap. You can make some other thing.” Mars Melto, 2018

Remix is a word used in many contexts. You might think of it in relation to music – the digital remix of one song to make another, or as the kind of fusion of foods and flavours in contemporary cooking that Mars Melto describes. Remix is about taking existing elements and mixing them again to make something new. It is about finding new pathways and processes, drawing on traditions, to carry us into the future.

In Indigenous cultures, and in Vanuatu in particular, neither the idea nor the practice of remix is new. Pacific scholar Katerina Teaiwa, reflecting on contemporary dance in the Pacific, has written of remix as a concept reflecting “the agency, politics and creativity embedded … in the context of pre-colonial and colonial histories of exchange and the so-called postcolonial or globalising present”[1]. The tradition of borrowing and exchange is deeply rooted in the cultures of Vanuatu. In her studies of traditional music in Oceania ethnomusicologist Monika Stern has describedthe integration of elements from other cultural groups and performances as a process of keeping of a repertoire of fixed elements while new elements are added in. These musical innovations do not destroy the tradition, but are inserted by respecting spirit and ancestral values. The deep cultural rootedness of this process of borrowing and remix allowed each community, and some could argue each individual, to preserve their own unique identities while integrating new elements and influences over time. Thus, as Stern has observed,  “renewal allows custom to live”[2]. 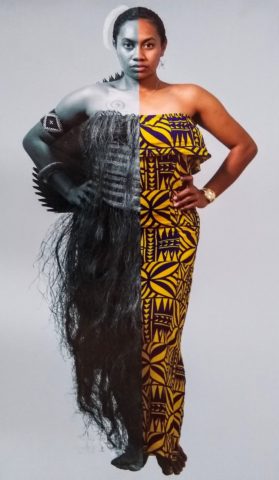 Role of linguistic diversity in building a global community with shared future: protection, access and promotion of language resources