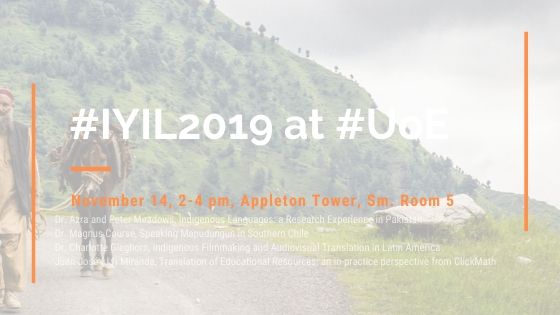 IYIL 2019 Symposium at University of Edinburgh

In honor of International Year of Indigenous Language 2019, the School of Social and Political Science at the University of Edinburgh will be holding a 2-part Symposium on the 14 November in  Seminar room 5, Appleton Tower. This symposium will focus on the role of indigenous languages in “standard-settings” by exploring the integral role that indigenous languages have played in the work of our speakers from different sectors and by showing how language-based capacity building empowers indigenous people

The first hour of the symposium will involve a keynote address followed by a short Q&A.

Azra and Peter Meadows are Honorary Lecturers at the University of Glasgow in the Institute of Biodiversity, Animal Health and Comparative Medicine, where Peter Meadows was Senior Lecturer for many years. Azra Meadows has been a lecturer in Environmental Management in the Department of Civil and Environmental Engineering, University of Bradford, and a Research Fellow in the Department of Civil Engineering, University of Glasgow, UK. They are both Fellows of the Royal Society of Biology and Chartered Biologists. They have an international record of research, teaching and advice in marine waters and mountains, on environmental sustainability, natural hazards, rural communities, clean water issues and biodiversity. They have also published widely on the impact of biological activity.

“How can Indigenous Languages affect a research project and its outcomes, what are the challenges and how are these overcome. These are some of the many questions for researchers when they embark on national and international development work. Our work experience in Pakistan has given us insights into the sensitivities of cultural and social norms including Indigenous Languages not just provincially and regionally but also in isolated rural communities. There are 68 languages spoken in Pakistan, Urdu being the national language. Today we will talk under the banner of UN’s 2019 The International Year of Indigenous Languages (IYIL), in our case covering the four provinces of Pakistan with special emphasis on the Kalash. These non-Muslims are the endangered people of about 3,500 inhabitants living in three remote valleys of SE Chitral near the Pakistan-Afghanistan border. The Kalash have an oral language Kalasha that is of Indo-Aryan origin and a member of the Dardic group. The Kalash express themselves through prose or stories and song, with a rich indigenous culture of verbal arts, festivals, and rituals. They are a non-literate group who is a remarkable example of cultural resistance in the face of adversary and believe strongly in their polytheistic-animistic faith. It is always a joy and thrill to work with these indigenous people and learn from their unique Indigenous Knowledge and Language.”

The second part of the symposium will be a presentation and discussion with three panelists.

The panelists will make a short presentation, and then the audience will have the opportunity to ask questions about indigenous language issues. Each panelist will respond to the questions given by the audience so that they can contribute perspectives that come from backgrounds in different geographic areas and fields.

Magnus Course’s research is concerned with the relations between kinship, personhood, power, language and land. He completed his PhD on kinship and personhood among the Mapuche of southern Chile at the London School of Economics in 2005, and the ensuing monograph was published by the University of Illinois Press in 2011 as Becoming Mapuche: Person and Ritual in Indigenous Chile. The Spanish translation will be published by Editores Pehuen in 2017. He is the author of many academic articles on a variety of topics, as well as two edited collections, one (with Suzanne Oakdale) on indigenous autobiographies in lowland South America, the other (with Maya Mayblin) on new anthropological approaches to sacrifice. For the past four years, he has been working on the intersection of fishing and Gaelic culture in the Outer Hebrides of Scotland. He recently started new research exploring changing attitudes to death and the afterlife in Naples.

“In the Mapuche communities of southern Chile there are some things which you clearly see as political: extrajudicial killings by the police, hunger strikes by political prisoners,  the dawn raids used by the Chilean state to terrorize Mapuche people, and so on. But there are other things which seem to flatter you into overlooking both their political nature, and your own not so innocent place in that politics. Language was just such a thing, seducing me and hiding behind layers of authenticity and ignorance. In this talk, I explain why.”

Dr. Gleghorn’s research engages with the politics of authorship, aesthetics, and film production in diverse contexts across Latin America. From 2009 to 2014, she worked on the European Research Council project ‘Indigeneity in the Contemporary World: Performance, Politics, Belonging’, hosted at Royal Holloway, University of London, during which time she also collaborated on the international exhibition of indigenous art and performance ‘EcoCentrix: Indigenous Arts, Sustainable Acts’, at Bargehouse, Southbank, London. She has contributed to several anthologies on women’s filmmaking in Latin America, published widely on Indigenous film and video and has co-edited a volume of essays on Indigenous performance, Recasting Commodity and Spectacle in the Indigenous Americas (2014). She is currently undertaking an AHRC Leadership fellowship on Indigenous filmmaking in Latin America, which involves a new programme of work considering audiovisual translation and Indigenous languages on film.

“Discussions of indigeneity in recent Latin American film, prompted by the release of The Serpent’s Embrace (Guerra, 2015), Ixcanul (Bustamante, 2015), and Roma (Cuarón, 2018), among other productions, have afforded an exciting critical juncture at which to rethink language and the constitution of Latin American cinema. If Latin American film might be considered to have experienced an ‘Indigenous turn’, it has, at the same time, largely run in parallel to initiatives that circulate through the category of Indigenous filmmaking per se. The relationship between Spanish or Portuguese and the development of Latin American Film Studies, so instrumental to the discipline’s emergence as part of Modern Languages degree programmes, sits uncomfortably with films produced by Indigenous directors in the region. My current work engages with the ways in which Indigenous filmmaking from the region operates through a complex process of audiovisual translation.”

JJ has been running ClickMaths in South Africa for the past three years where he has been responsible for the translation of educational resources into local languages and the execution of pilots across South Africa to provide free access to these resources. JJ speaks English, Spanish, and French and learned Afrikaans and Zulu while living in South Africa.

Topic: Translation of Educational Resources: an in-practice perspective from ClickMaths

What is the need for maths translations into local languages? What is the process of translation, and what can the implementation look like? Drawing from his work with  ClickMaths, a South African non-profit which leverages technology to provide access to educational resources in local languages for free, JJ will explore the importance of providing educational material in local languages, speak about the implementation process, and highlight the capacity-building results that ClickMaths has achieved from localizing over 3000 maths videos from English into Sepedi, isiXhosa, and isiZulu,  providing access to these educational resources for free; either offline or at no data cost, and working in partnership with schools, community centers, and adult learning centers in townships and rural areas.