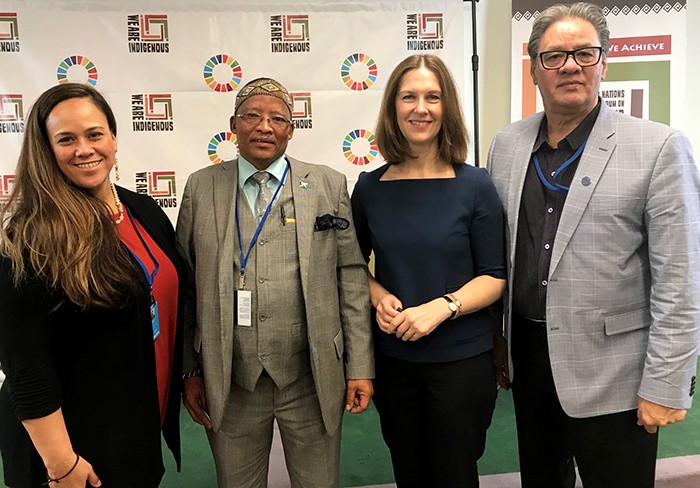 On 16 April 2018, UNESCO presented the Action Plan(link is external) for the organization of the 2019 International Year of indigenous Languages (IY2019) in the 17th session of the United Nations Permanent Forum on Indigenous Issues
UNPFII).

The Action Plan serves as the guiding document for joint efforts to promote indigenous languages around the world in 2019, and contributes to put the UN Declaration of the Rights of Indigenous Issues into effect.

The IY2019 aims to draw attention to the critical loss of indigenous languages and the urgent need to preserve, revitalize and promote them, as well as to the necessity to take further urgent steps at national and international levels. The freedom to express themselves in their own language and to allow free exchange of knowledge are core components of human rights.

Getting involved in the IY2019

Ms Irmgarda Kasinskaite, Programme Specialist at UNESCO, encouraged Member States and organizations to get involved through multi-stakeholder participation, namely by getting involved in the steering committee or ad-hoc groups.

The steering committee comprises one Member State representing each region; leaders and representatives of indigenous peoples, interested Member States, expert colleagues, the special rapporteur of Rights of Indigenous Peoples, UNESCO and UNDESA. Special ad-hoc groups will also provide advice to specific aspects of the Action Plan, and allow all other interested parties to be involved.

Aside from the plenary session, UNESCO also hosted a side event to discuss the potential events and activities for the IY2019.  The objective of the session was to share views on the proposed Action Plan, identify key partners interested in contributing to activities, and create a calendar of events for next year celebrations.

During the session, a panel introduced the importance and significance of the International Year. They discussed different programs working at advancing culture and arts, their support to the proposed Action Plan, best practices to promote indigenous languages, and the need for capacity building to revitalize cultural heritage. In addition, they also suggested some proposals for implementation of the IY2019:

Ms Irmgarda Kasinskaite participated in a live webcast in the Indigenous Media Zone organized by the Permanent Forum. In the interactive discussion, participants covered approaches to significance of the upcoming International Year on Indigenous Languages, and raised questions including the top issues ensuring survival of indigenous languages, the engagement of governments, the long-term benefits of the IY2019 Action Plan, and the impact and role of the Steering Committee.

They also stressed the importance of inter-generational connection, and cultural heritage through preservation of indigenous languages.