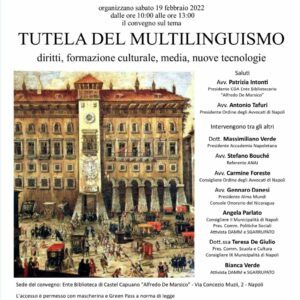 Multilingualism preservation: rights, cultural education, media, new technologies. The theme of the conference conceived by dr. Massimiliano Verde, President of the Neapolitan Academy and organized in collaboration with the Council of the Naples Bar Association as well as the “Alfredo De Marsico” Library of Castel Capuano, is multilingualism as a principle and value protected by […]
Read More
Share:

Workshop on media creation in the Ho language

As a response to the International Decade of Indigenous Languages, many language digital activists are working towards building capacity and resources to promote their own languages. This workshop is for discussing with the Ho youths at the Veer Birsa Munda Ho Students Union, Odisha their plans, the state of audiovisual media in the Ho language, and provide a capacity-building training for creating audio recording of pronunciations of words, a crucial resource for future speech technology development.
Read More
Share:

In a big effort to promote the importance of the Indigenous Languages, and to meke people aware of the risk of exstinction for many of them, the no-profit Omnibus Omnes Association is introducing to the public the first Italian-Cherokee dictionary, created by Raffaella Milandri and Myriam Blasini. This dictionary, containing the grammar, follows the Italian […]
Read More
Share:

Martyr Gundadhur is recognized amongst the eminent tribal heroes of the 20th century. His movement against the tyrannical rule of the British was showcased as a rebellion in the pages of history.
Read More
Share:

Multilingual projects of native languages in Mexico: Day of the mother language

The IEAL prepares the activity around native languages as part of the project: Other languages, other worlds: native languages in Mexico, directed by anthropologist David Lagunas and Aline Lara, a project within our Institute. Participating on this occasion will be: - Petronila Pérez Velasco: Native of the Sola de Vega Community Oaxaca. Mixteca Baja. Primary School Teacher. Tnu'u Savi Language. Tachi k☨v☨n: inclusive project in primary schools. -Jhonnatan Rangel. Master in Language Sciences and Applied Languages from the University of Rouen and PhD in Language Sciences from INALCO (National Institute of Oriental Languages and Civilizations). Ayapaneco language Ayapabot: using Twitter as a revitalization tool -Marco Antonio Martínez. Originally from Santa María Ocotepec, Mixe, Oaxaca, Mexico. Member of Kumoontun A. C. Member of the Network of Digital Activists of Indigenous Languages in Latin America. Speaker of the Ayöök language The ap-ok maaytïk and the Kumoontun app. -Hugo Cortez Lemus. Originally from Arantepacua, Michoacán, representative of this community established in the city of Tijuana, Baja California, Mexico. He was state coordinator of the Indigenous Front of Binational Organizations (FIOB) from 2008 to 2010. Speaker of the P'orhé language. The preservation and revitalization of the P'orhé (Purhépecha) language on the U.S.-Mexico border. -Adriana Kupijy Vargas. Originally from the community of Tejas, in the municipality of Santa María Tlahuitoltepec, Mixe, Oaxaca. Student of Pedagogy at the Facultad de Estudios Superiores Acatlán, Universidad Nacional Autónoma de México (UNAM). Community libraries. Promotion of culture and revitalization of language and community thought.
Read More
Share:

Asia and the Pacific / / Bali
digital

We hold wikithons (digital competitions) every 2-3 months to engage different swaths of the public around current issues. For example, we’ve held wikithons asking people to share their coping strategies under Covid-19 or how they’ve managed interfaith conflicts in their families or communities.  Each wikithon is held in Balinese and winning entries are translated into […]
Read More
Share:

CONSULATATION ON THE ‘INTERNATIONAL DECADE OF INDIGENOUS LANGUAGES IN ASIA’

This webinar through the virtual platform is to have a primary discussion on how collectively Indigenous Peoples in Asia can take action for IDIL 2022-2032 to make it successful and impactful. Each country representative will share the status of Indigenous Languages/Cultures of their Country and the strategy for IDIL 2022-2032 for three to four minutes.
Read More
Share: 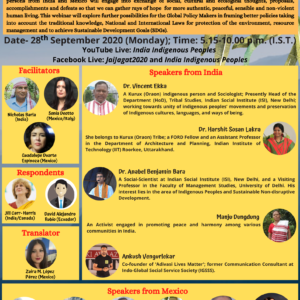 Peace and Non-Violence: From the Roots of the Original People (Joint Collaboration of Indo-Mexican Indigenous Peoples for a Better Tomorrow)

‘A Joint Collaboration of Indian - Mexican Indigenous Peoples for Better Tomorrow’ Learning lessons from Mother Earth for human existence is the Indigenous way of life, which the Indigenous communities across the world have been practicing even today. The voice of the original peoples, echo of the oral transmission of ancestral knowledge, resonates in the memory like our heartbeat in the mother’s womb. The Indigenous persons from India and Mexico will engage into exchange of social, cultural and ecological thoughts, proposals, accomplishments and defeats so that we can gather rays of hope for more authentic, peaceful, sensible and non-violent human living. This webinar will explore further possibilities for the Global policy makers in framing better policies taking into account the traditional knowledge, National and International Laws for protection of the environment, resource management and to achieve Sustainable Development Goals (SDGs).
Read More
Share:

Presented by a member of the Kanienkahaka (Mohawk) community, this 5-week program introduces attendees to the Kanienkahaka language and cultural traditions through craft, language, song, dance and feast.
Read More
Share:
Page 1 of 46123›»
Scroll